Charity Campaigns That Shook the World

Evoking emotion through your charity campaigns not only builds awareness, but if your ad truly resonates with a viewer, it can also change the way they think about the world. To help inspire your charity’s next hard-hitting campaign, we gathered some of the most iconic and memorable examples from around the world.

Back in 1978, Dogs Trust Chief Executive Clarissa Baldwin was tasked with creating a slogan for what is now the UK’s largest dog welfare charity. A boom in pet shops led to impulse buying, especially around the festive period. The unwanted dogs were then left to fend for themselves as owners regretted committing to their care. This iconic slogan is re-adapted and reused for annual campaigns for the brand even all these years on.

But did you know that this well-known slogan actually started its life as a car sign? After Baldwin and her husband coined the slogan one evening over a glass or two of wine, they needed a cheap way to get it out into the public. Dogs Trust had the ingenious idea to send car stickers out to 200,000 motorists, solidifying the important message in our minds forever. 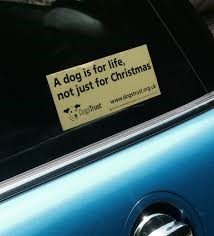 This 2006 campaign by the British Heart Foundation partnered with the Department of Health saw a shocking and grotesque visual of the effects of clogged arteries due to smoking. These memorable billboard posters along with the TV ad encouraged 14,000 smokers to kick their habit.

Shock tactics and purposefully provocative advertisements are incredibly impactful, especially when it comes to changing a mindset. And the highly addictive habit of smoking needs an impactful change of mindset to be effective – this ad nailed it! 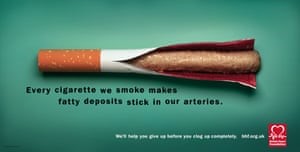 Since its initial launch in 2002, Breast Cancer Now’s Wear It Pink campaign has raised more that £35.1 million into funding breast cancer research. The premise of the campaign is simple: register with the charity, wear pink on Wear It Pink day (which happens every October during breast cancer awareness month) and raise money.

Sometimes a simple campaign is the most effective, especially if you’re getting people to participate for sponsors. Most people own something pink, and it’s the colour of the breast cancer awareness ribbon, so it’s a very logical and straightforward campaign that sees success year on year.

We don’t know about you, but these cute illustrated hedgehogs are ingrained in our childhood memory – and in our superb road safety skills! This popular TV campaign that taught UK children how to cross the road ran from 1997 for nearly two decades and is beloved by many.

The ad followed two cartoon hedgehogs walking along the pavement of a busy road with the older hedgehog teaching the younger one how to stay alert when crossing.

One of the biggest killers in men is suicide, which is widely caused by societal pressure to be ‘manly’ and not talk about their feelings. Movember’s Unmute – Ask Him campaign aims to encourage more men to talk about their mental health in a bid to reduce male premature death by 25% by 2030.

The clever campaign featured three tutorial-style social media videos, showing men doing something typically ‘blokey’ like fixing a flat tire. Each video started off subtitled, as many tend to watch videos on mute. The listener is then invited to turn the sound on where it is revealed that the subtitles don’t match what’s actually being said.

It asks people to ‘unmute’ in real life and really listen to what the men around them are saying and ask if they’re okay.

Although the last campaign showed how social media can be used to make a change, UNICEF Sweden’s hard-hitting campaign took an entirely different stance on the platform. In 2013, they called out so-called ‘slacktivists’ on social media with their slogan ‘likes don’t save lives’.

The campaign consisted of four videos, the most viewed featuring a boy called Rahim who tells you he’ll be alright because UNICEF Sweden’s Facebook page has nearly 200,000 likes. They also included a powerful image that said ‘Like us on Facebook and we will vaccinate zero children against polio.

The videos were watched over 750,000 times and raised enough money to vaccinate 637,324 children against polio.

In 1994, a poster featuring supermodels Emma Sjorgerg, Tatjiana Patitz, Heather Stewart Whyte, Fabienne Terwinghe and Naomi Campbell in nothing but their birthday suits appeared. The ad showed numerous notable figures in the fashion industry standing up against the use of real fur, claiming they’d rather go naked than wear fur. 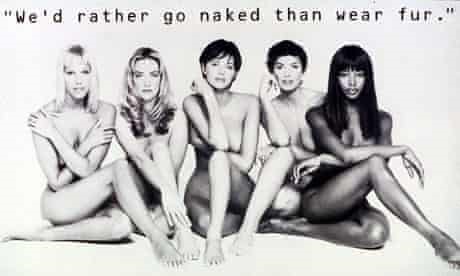 After 30 years and numerous celebrities going nude for the cause, PETA have actually now retired this campaign. The large majority of retailers and designers now distance themselves from the use of fur, which is a huge success for the organisation and endangered species.

For a non-profit especially, going viral online is big news. So, when the ALS Ice Bucket challenge took the internet by storm back in 2014, this triggered a whole new format for charities to raise funds and increase engagement.

The challenge was started by three young men living with the neurodegenerative disease ALS, who filmed themselves pouring buckets of ice water over their heads, posting it on social media and inviting others to take the challenge.

Within a month, more than 17 million Ice Bucket Challenge videos had been posted on Facebook, with celebrities like Lady Gaga and Bill Gates taking part too. This resulted in $115 million raised for the ALS Association for conducting research and spreading awareness about the disease.

Feeling inspired? Us too! One of the best ways to start your campaign (without eating into your charity’s budget too much) is an evocative poster, like some of the ones featured in this article. Or, check out these 20 budget-friendly fundraising ideas for more inspiration.

Hi, Nathan here. As a Chat Advisor at instantprint, I pride myself on my print knowledge. As well as helping you out over Live Chat, I write helpful content to answer your questions.

What’s the Difference Between Booklets, Books, Brochures, Magazines and Pamphlets in Printing?

How to Plan a Mail Drop for Your Local Election Campaign

Charity Campaigns That Shook the World