With lockdown restrictions set to ease yet again in England on the 19th July, many of the office workers who’ve been working remotely since last March will start to trickle back into their place of work, possibly for the first time since the start of the pandemic.

The Covid-19 pandemic has changed our perception of many things; blowing out candles on cakes, licking envelopes to get them to stick and even watching old films and TV shows set in crowded bars or train stations are about enough to give us the heebie-jeebies after a year of social distancing and mask-wearing.

With this in mind, we wanted to find out which office habits – that were considered completely normal (if they were even ‘considered’ at all) – are now perceived as actually kind of gross.

We surveyed 1000 UK employees, of which 45% claimed they were now more aware of disgusting workplace habits following coronavirus. Here’s exactly what they want to be banned on their return to work.

And the Worst Office Habit Award Goes to…

One of the very first questions we knew we needed an answer to was which pre-lockdown office habits do we want to ban for good on our return.

Our respondents certainly didn’t disappoint, listing the top 5 office habits they find the most disgusting as follows:

Other honourable mentions that didn’t make the shortlist for grossest office habit also include pen-chewing (24.8%), high fives (23.3%) and sitting on co-workers’ desks (19%).

This isn’t the first time that poor personal hygiene has topped the list of bad office habits, as it also featured prominently in our 2019 study uncovering techniques for dealing with your most annoying colleagues.

And it turns out that Covid has only strengthened our opinion on the importance of handwashing – not surprisingly either after over a year of singing happy birthday to ourselves (twice!) at the bathroom sink.

Want to stop this bad habit from becoming an issue in your place of work? Here are some free printable handwashing posters for your communal sink areas!

We recently revisited the stigma of calling in sick to find out if we’re more or less likely to call in sick after the Covid-19 pandemic. Here’s what we found…

Men vs Women: Who’s the Most Gross?

Finally settling the age-old debate, our survey revealed that women tend to be a little more hygienic than their male counterparts when it comes to washing their hands. 45% of women want to ban not washing your hands after visiting the bathroom compared with just 40.9% of men.

However, at 38.5% men were more likely to want to ban coming into work with a cold or cough compared with women (36.2%), and were considerably more opposed to keeping an unwashed gym kit in the workplace (29.9% vs 22.9% for women).

On the more formal side, only 32.2% of men are averse to kiss greetings compared with 33.7% of women – anyone fancy a smooch?

Does Your Department Make a Difference?

Interestingly, the department you work in might be a factor in what you find the grossest habit to be following the pandemic.

HR would be the first department to ban close-up interactions like hugs (42.9%) and high-fives (31.4%) in the workplace – compared to just 11% of marketers who are keen to ban high-fives.

Although the majority of departments surveyed choose ‘not washing your hands’ as the grossest habit, there were lots of discrepancies. Here are the biggest gross habit no-goes for the ones who voted otherwise:

So where did the driving force behind the top 5 coming from department-wise? Some habits were universally disliked but these departments, in particular, are out on the witch-hunt for these gross behaviours.

Top 3 departments in favour of banning each gross habit 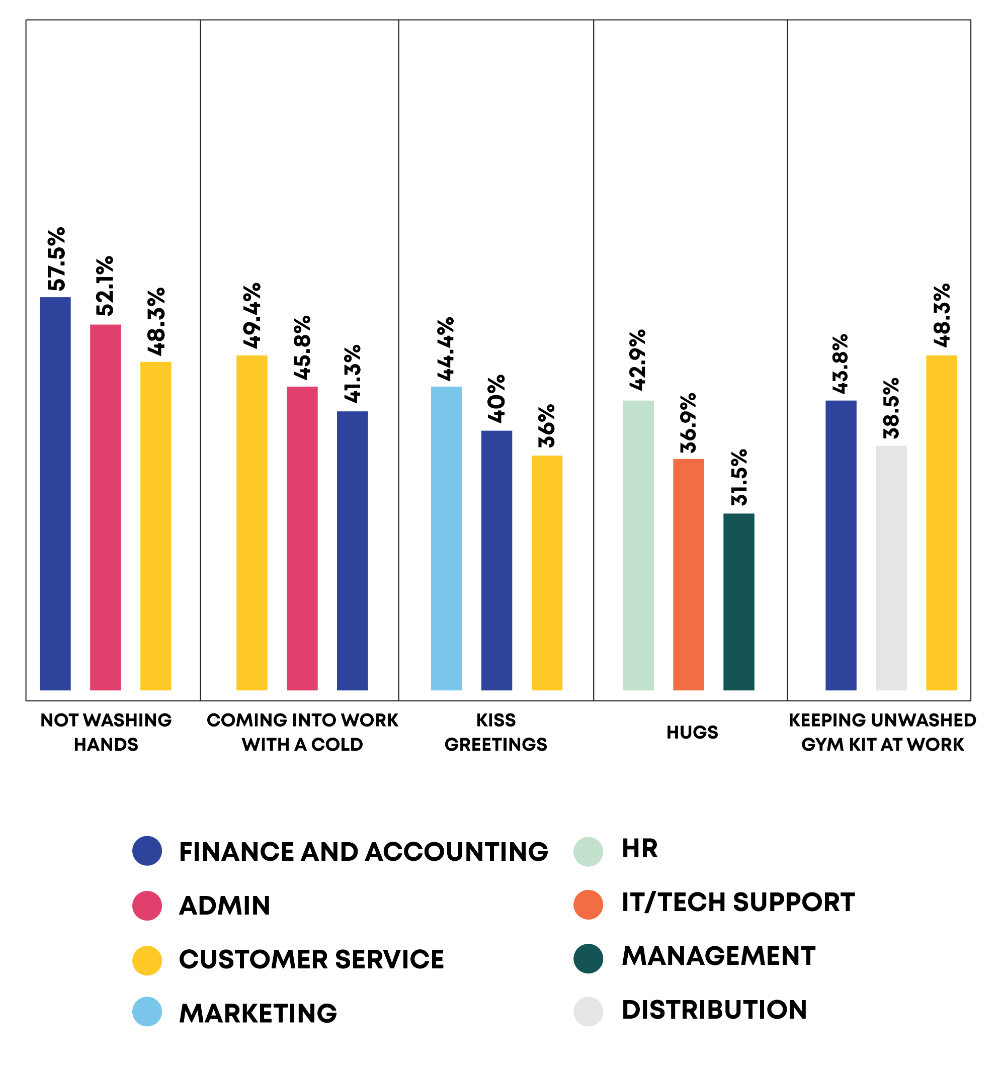 Finance and accounting and customer service are clearly spearheading the campaign for better office cleanliness, whereas other teams don’t make the list even once. This suggests certain teams are definitely sticklers for hygiene compared to the others. Does this fit with the team at your workplace?

Ironically, only 4.3% of those working in the legal department want to ban those colleagues who are breaking the ‘clear desk’ policy.

Although hugs were revealed as one of the top behaviours UK workers want to ban on their return to the office, this habit received a landslide of votes from one city in particular and that was Belfast (40.9%).

Participants from this city also voted highly in favour of banning not washing your hands after going to the toilet (59.1%), along with Bristol (56.5%) and Cardiff (52.8%).

On the flip side, only 31.7% of respondents from Norwich voted to ban not washing your hands.

Glaswegians were the most opposed to colleagues coming into work with a cough or cold (60.7%). However, those from Manchester might be feeling the most pressure to go into work when they’re under the weather as only 1 in 5 (21.7%) want to ban this.

Belfast, Cardiff and Bristol are the least tolerant cities for gross behaviours, scoring highly on banning many of the top 5 gross office habits.

Top 3 cities in favour of banning the grossest habits 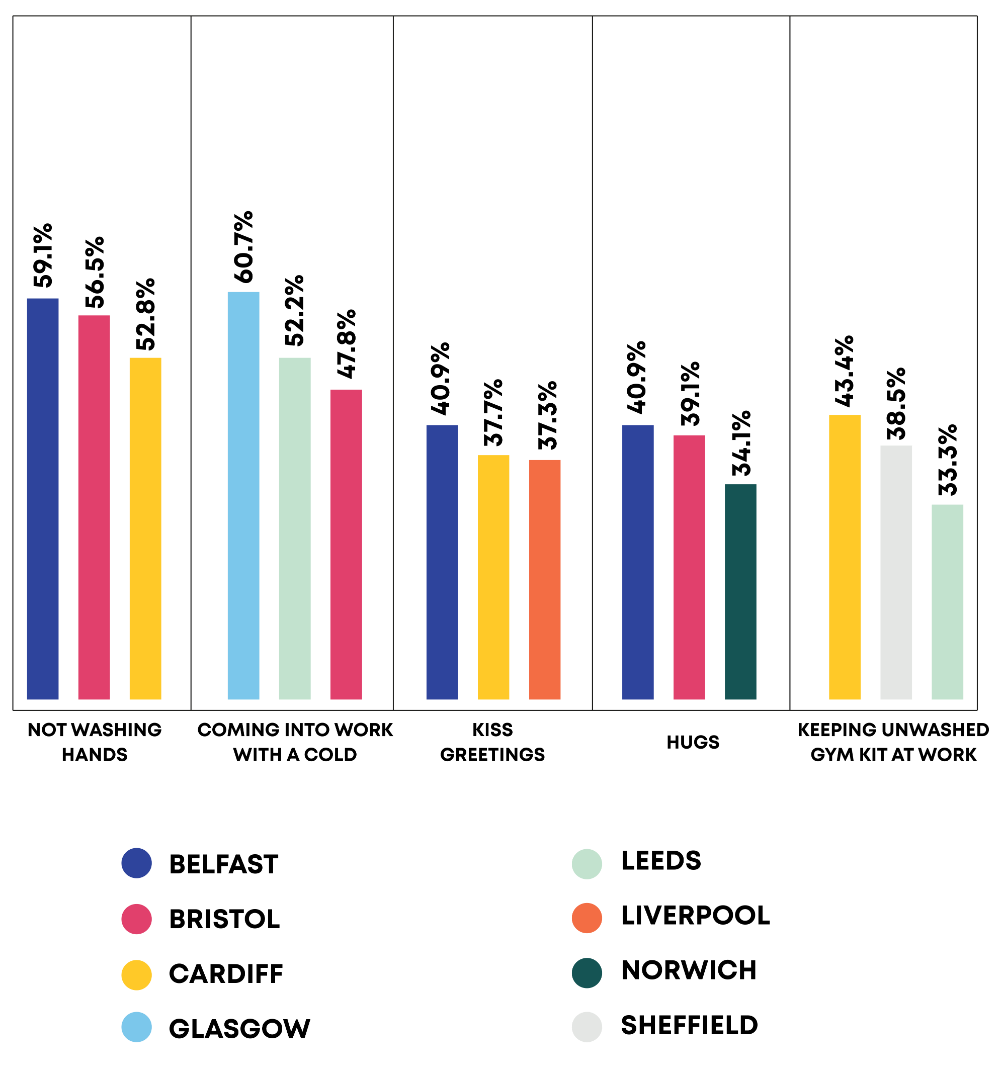 Are We More Aware of Gross Habits Now?

We wanted to know whether or not living through a pandemic has made us more aware of everyday behaviours that might now be considered growth.

When quizzed, 45% said they are more aware of gross habits following Coronavirus. However, over a third (36%) said they’ve always found these types of behaviours to be unpleasant.

Women were more likely than men to already find the habits gross pre-pandemic (39.1% vs 33%), however it seems that men have had their eyes opened during lockdown as 46.3% claim to now be more aware of just how disgusting some of these habits are compared with 44.5% of women.

1 in 10 respondents confided that, although they do notice these behaviours as gross now, they won’t be strict or clinical about them.

Only 4.9% said that they still don’t really mind any of these habits.

As one might expect, 7.1% of men are less likely to mind gross habits compared with just 2.6% of women.

Now that we’re more aware of our bad habits, it might make you cringe to think back to all the times you performed any of these behaviours without a second thought. Here are the top 5 gross office habits we were guilty of participating in before the pandemic:

Thankfully, only 6.1% of respondents told us they neglected washing their hands after using the toilet before the pandemic.

However, the one overlap on this list compared with what we want to be banned the most is coming into the office with a cold. Although it’s something many of us are guilty of – and something we all want banning – there can be a lot of social pressure to come into work despite being ill.

Handshakes are the most professional way to greet someone, so it’s not surprising that they’re on the top of this list. Only 17.4% of us want handshakes to be banned, so once social contact restrictions are eased, we’re likely to see this behaviour return.

How to Call Someone Out for Their Bad Habits at Work

After a year of following strict hygiene and social distancing guidance, it’s probably not a surprise that 41.2% of us would be likely to call someone out on their gross habits in the workplace.

45% of men said they’d be likely to call someone out compared with just 37.2% of women.

In terms of cities, Birmingham employees are most likely to call one another out on their bad habits (50.6%), followed by Londoners (48.7%). With just 28.7% willing to say something about bad behaviour, you’re least likely to be called out in Norwich.

Management is the department most likely to say something to a colleague regarding their gross behaviours (58.3%), whereas only 27.8% of those in marketing would dare say anything.

So, if you’re itching to say something about Sandra chewing on the pen you let her borrow, what’s the best way to bring it up professionally?

We asked our in-house Personal Development and Wellbeing Trainer, Sean, for his top tips on calling out particularly yucky co-worker habits the instantprint way!

Whenever you address an issue with a colleague, you should always keep it positive. Instead of demanding that Steve goes and washes his hands after he’s been to the toilet, ask whether he’d like to get washed up in the kitchen together before lunch, or offer him some hand sanitiser – which is often the next best thing!

2. Take control of your own space

Even if you can’t influence what your colleagues are doing, you can influence what’s happening in your space (AKA your desk). That includes being able to frequently wipe down your keyboard and mouse with antibacterial wipes and using hand sanitiser.

3. Talk to your boss

If your colleague’s behaviour is getting really out of control, it might be worth having your manager support you. They’ll have either been trained or have experience in setting boundaries for their team, meaning it might be more appropriate to go to the manager rather than tackling this off your own back.

Which habits took a global pandemic for you to realise they were gross? Have you ever called someone out for their gross habits? We want to know your grossest office story! Let us know by tagging us on Twitter @instantprintuk.