With one of the biggest jobs in England about to be filled, here at instantprint, we thought we would celebrate this occasion by producing a business card befitting of the role, creating the biggest business card for ‘Big’ Sam Allardyce, and then delivering it to his new employers, the Football Association (FA).

Following the production of the Guinness Accredited World’s Largest Business Card, we wanted to use it to help Big Sam get noticed in his new job – one that he’s been waiting to get for the past decade, and that he has called "absolutely the best job in English football".

So on Friday 22 July – the day, after much speculation, he was finally appointed - we set off from the instantprint factory with three gigantic business cards and made the pilgrimage down to the FA’s headquarters at Wembley stadium on the train. 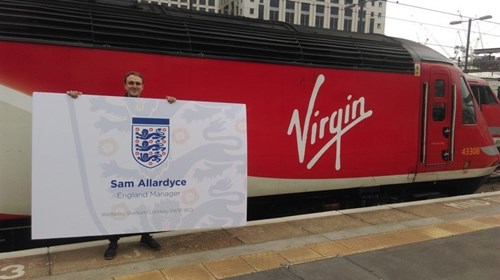 We departed the train at King’s Cross and made our way through to the tube, negotiating our way through the tightest of tunnels and weaving past disbelieving commuters, with 35 square feet of card bobbing through the crowd. We successfully navigated on to the Metropolitan Line, and were off to Wembley Park station, with our carriage dominated by our behemoth business card, that took a lot of care and cunning to fit in!

Once off the tube, it was out onto Wembley Way with countless numbers of the public pointing, commenting and gasping at our creation. 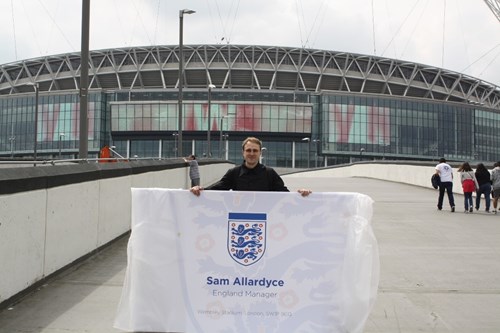 The cards paid a visit to the Bobby Moore statute, and did a loop of the stadium, before two of the three were taken down into the main reception to be collected by a couple of members of the FA’s press team. They struggled on the escalator with the cards, and we saw them disappearing up into the FA’s labyrinth of corridors. 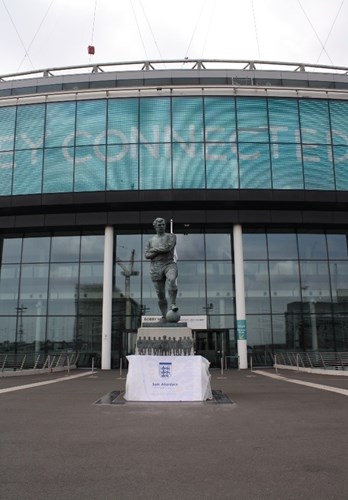 With one business card remaining we headed back towards central London with the hope of seeing the main man. En route back down Wembley Way we were filmed by the guys from Sky Sports News HQ, who informed us that the announcement was likely to be made in the next hour, and perhaps most tantalising, couldn’t confirm where Allardyce was.

With this in mind, we guessed that Big Sam could have been in London, so decided to stop off at spots that he might visit, were he in town.

The first stop of the tour was to the London hub of Nike, the English football team’s kit-maker at Oxford Circus’s NikeTown, where chaos ensued, with people flocking to see the card and enquiring as to whether we knew if he’d been confirmed. We pondered whether Sam could’ve been flown in to sign autographs and to meet his public, but there was no sign of him here. 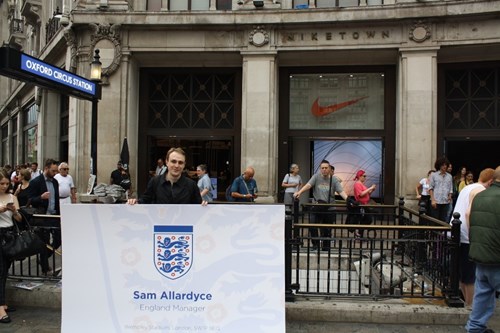 We soon moved on, marching down Regent Street to Piccadilly Circus for a couple of snaps among the masses and the vast neon boards. It’s the perfect tourist spot and a great place for a meet and greet, but unfortunately Sam hadn’t quite made it there yet. 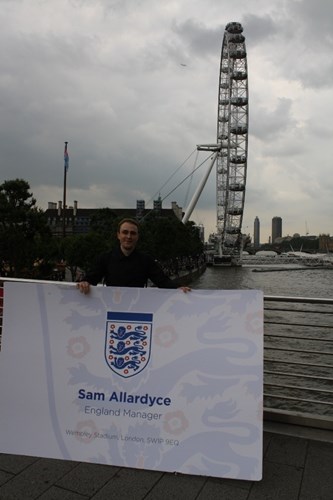 It was then back on the tube for a trip down to Embankment, a walk over the bridge and then a chance to check for Big Sam at Big Ben and the London Eye, before heading back to Kings Cross for the return leg of the journey home to Yorkshire. 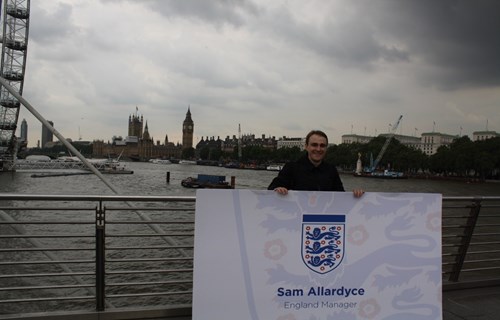 With torrential rain buffeting us as we walked down to King’s Cross, the colossal card was employed as a gigantic umbrella, fully keeping the huge droplets off our heads – and proving that it’s not just a shiny piece of artwork! As the downfall took its toll on our business card, it perished, and wasn’t able to return on the train journey home. We hope that Big Sam’s England career lasts slightly longer. 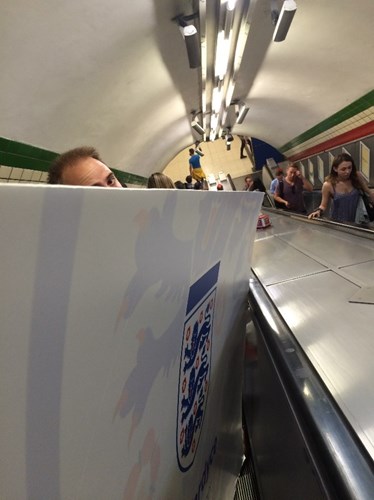 It was only when we were on the train leaving London, that the announcement was actually made, and confirmation of Big Sam as England's 14th permanent manager had finally trickled through. It truly marked the perfect conclusion to a big day for our business cards, and we can only hope that the Big Business Card for Big Sam comes in use to the new England manager.

Hey, I’m Lucy, a Customer Service Advisor at instantprint. I’m trained as an expert in all things print and aim to answer all your most asked questions here on the blog.